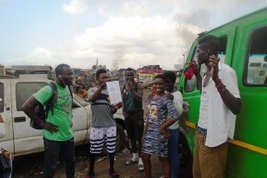 At the Refuge, all children are registered. The basic information is registered in a book and this is transferred to the computer. The children start their preparation period and this is recorded as well. As soon as the training starts, money is needed and the child will be listed with one of the donors who support CAS in the sponsorship scheme.

As mentioned before, inconsistency is a serious problem. The child starts learning a trade but after a few months decides to stop or change trades. It is the task of the social workers to convince the child to continue. Somehow it is logical; they have very few role models to learn from. When father or mother is educated, the child will be encouraged to learn as well.

When children are sick the nurse takes care of them. Serious cases were referred to the hospital and handed over to the social worker of the DSW at the hospital.

Health Education classes were organised and the nurse touched on bilharzias, birth control methods, personal hygiene, intensive breast feeding and weaning. We also had visitors from the lion’s club who gave them education on hard drugs and its effect on the body. Often these lessons are part of the Friday entertainment program.

Security of the House of refuge remains a problem. CAS asked the assistance of a security firm to be sure the Refuge is kept safe at night. At the refuge, some basic skills are taught to those interested. Skills such as: catering, cooking, hairdressing, decoration, bead-making, carving and sewing, as well as domestic services and baby care.

The Refuge also serves as the main office of CAS. 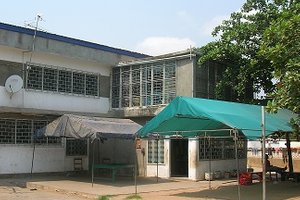 The idea behind all demonstration lessons is to give the children the chance to see and begin to try out several trades. At the Refuge there is a demonstration department to interest the children in various trades and skills. The children can try their hands at woodcarving, hairdressing, sewing, bead making, decorations, catering, cooking, painting and general handicrafts. A lot of children are interested and enthusiastic about the demonstration classes, especially the drawing and coloring. All trades are demonstrated at the same time to offer the child a variety of experiences. The child also has the opportunity to go on an excursion or see the different trades on video.

The products the street children make with their instructors are sold at a handicraft shop at the House of Refuge. They are also sold at bazaars where CAS takes part. The profits are used to continue to improve the demonstration trades. We also exhibit the products to show what the street children are able to make and create awareness. Although the department does receive orders, the department does not make overall profits; a lot of money is needed for the materials and salaries if the instructors. 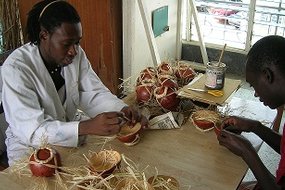 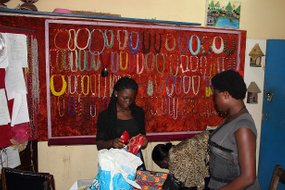 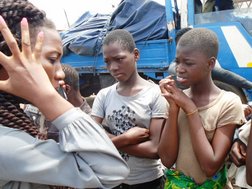 CAS staff carry out ‘fieldwork’, meaning they visit the streets to be with the children to find out where they work and sleep and inform them of CAS activities and programmes.  Fieldworkers interact with the street children and offer them the opportunity to use the services of the refuge.  In this way children can benefit from the work of CAS.

CAS sees it as an important part of its work on the streets.  The fieldworkers meet the street children and start a friendship.  They talk to the children, gain a level of trust, listen to their problems and sometimes give advice.  They give the child advice and information about the various possibilities CAS can offer them.  The street corner facilitators teach health education, life skills and literacy at selected meeting points.  Meeting points are mostly different places such as verandas of shops, areas around public toilets or public bath houses.  Children are encouraged to visit the refuge at their own free will.  It is entirely up to the child whether they decide to continue the contact and come to the refuge or not.

All the fieldworkers and street corner facilitators have been assigned to a particular area of town.  They keep records of the number of children they teach and meet and they give reports about the circumstances of the children on the streets.

The streetcorner education is carried out in cooperation with other NGOs and the Department of Social Welfare. 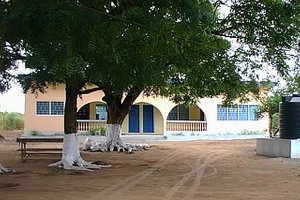 In 1995 CAS started a sponsorship program for street children. Children who visit the House of Refuge are “prepared” to listen to a teacher or instructor and behave as expected. The length of this preparation period varies from child to child. Some have had a kind of educational background, many start as stark illiterates. Many learn how to behave properly, others need ample time to do that.

CAS tries to introduce these children in various trades. Children are encouraged to take part in trades demonstrated, other trades are shown on videos or the child gets an opportunity to go on excursion to one of the workshops or factories. In general, it takes time for a child to make up his or her mind to choose a trade to their liking.

CAS introduced trades such as candle-making and ceramics but noticed that many children did not show interest. No interest was shown for agriculture as well although, CAS started with Hopeland farm project during the same year for that purpose.

In 2003, on the occasion of CAS’ ten years existence as an organization, a survey was conducted on children who benefitted from the sponsorship scheme in the past. About, half of the trained youngsters were located, (all over Ghana) and we were happy that all had found jobs and several were married. However, they had not found a job in the trades they were trained for. In fact, this was logical because unfortunately, there are many unemployed in Ghana.

Traditional trades such as carpentry, masonry, hairdressing and sewing are sufficiently taken care of. CAS had to introduce “new” trades such as aluminum fabrication, electronics, sign writing etc.

Doing so also entails that those who are trained can only find jobs in urban centers.

The training for a trade takes many years. Years of practice and experience.  The bases should be good and a training of three years is the barest minimum. However, CAS had no choice because, for the training, financial support is needed. Because of the expenses involved and the number of children who showed interest, CAS chooses for a training of three years. During this three year period the trainee could sit for grade two of NVTI certificate which could be the bases for further training.

Only a few children of the many who roam the streets are able to go to regular school. The reasons are their behavior, their age and their educational background. Often the children wait until they are 14 or 15 before they decide to follow education.

Children are happy to be free, to play when they want to play. Happy not to have to listen to a teacher and follow the rules. But when they wait until they are 14 or 15 it is too late to start with schooling. At the beginning of the sponsorship scheme, CAS placed children even younger than 14 in regular schools but it was not a success. Teachers stigmatized the children who came from the street and the other children had no mercy on them. CAS now places only one child in one particular school and makes sure that the behavior of the child can be acceptable.

However, CAS had also many successes with children who had dropped out of education and got the opportunity to return.

Several completed Poly-tech and some made it to the university. A number of them received scholarships and are now abroad.

We have started with a shorter sponsorship program, we teach children skills. It will give them an income to survive. We teach them skills such as cooking, taking care of babies, sewing, and hairdressing, bead-making, painting, Decoration and general handicraft.

In order to learn skills, you need to have some kind of talent. We know some children who are very good in drawing and painting, some are talented footballers, and some easily learn how to cook many different kind of dishes. Unfortunately, only a few have these talents. The result is that children try one skill after another and cannot make up their mind what they like.

For each skill, CAS has written out three stages which the child has to follow either at the House of Refuge or at Hopeland. When the three stages have been past successfully, the child is placed on attachment. This can be for instance in small restaurant or at a training school for sports.

The training in these skills is limited to a period of one or one and a half year. The expenses are limited because most of their training is done at CAS premises. 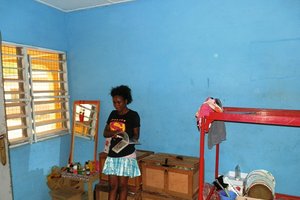 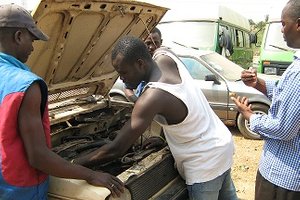 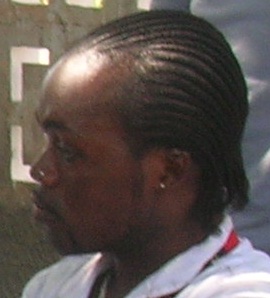 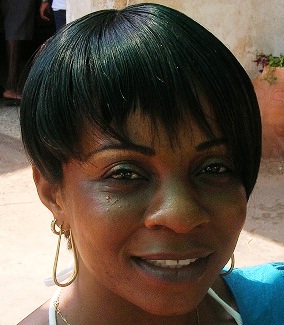 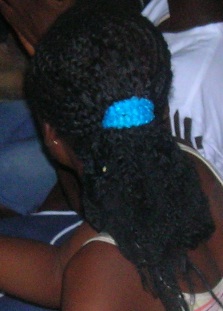 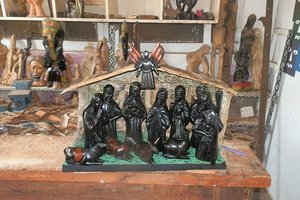 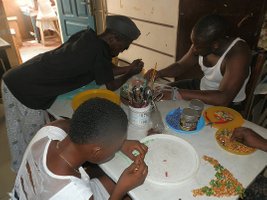 CAS owns a centre, known as Hopeland Centre in Adjei Kojo near Ashaiman, not far from Accra. Hopeland is a department of CAS, and provides a sort of half way house for street children who want to leave the streets and be educated. The time they spend at Hopeland varies.

Street children who want to leave the streets and be educated, follow the preparation course provided at the House of Refuge.

For the child it is a first step towards leaving the streets and living in a new environment. At the centre, the child receives more attention from social workers and staff. Forty children, 20 boys and 20 girls, can stay at Hopeland. Several become functional literates, other learn a skill.

At Hopeland, children go through preparation lessons as a way of helping them to take decisions for their future. Depending on their choice they are either supported in learning a trade or go to school. They follow lessons in literacy, mathematics, English, health education and life skills. It is a continuation of what they have learnt at the House of Refuge. 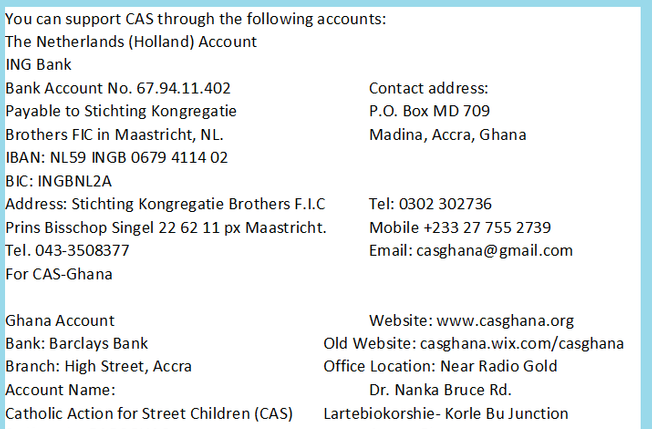 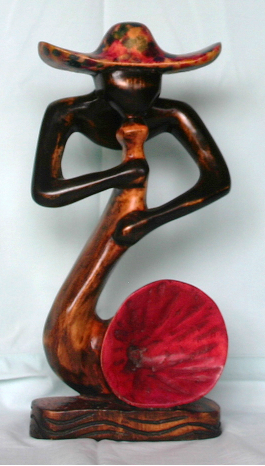 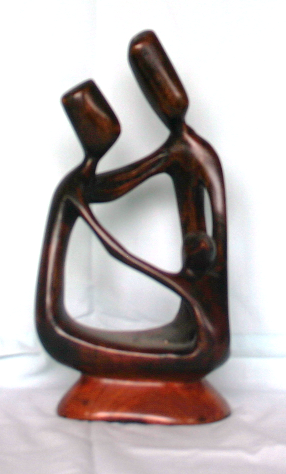