CAS took part in a Bazaar at the Lincoln Community School Abelemkpe -Accra - on the 11th of Nov. 2017

CAS’ main activity is on the streets of the city of Accra. We have to go where the children are and be with them. There, we have the opportunity to advise and educate them. Fieldworkers visit the streets several days a week. On Saturdays and Sundays they do not operate.

During the early days, CAS fieldworkers operated in many areas in the city of Accra. Accra City covers a vast area (324,000 square kilometres) and over the past years has expanded even more. Fieldworkers cannot operate everywhere. Therefore, specific areas where many street children operate were selected as working areas. These have changed, due to the reconstruction of the road network as well as relocation of markets. Also sleeping areas for street children have changed several times over the years. In fact, working and sleeping areas for street children are not static.

A fieldworker is responsible for making contact with the street children, to gain their trust, listen to them and give advice and help. Fieldworkers also interact with the adults in the area where the children sleep and work.

They know for sure the difference between an “Urban Poor” child and a street child. They know who is in charge and where the sleeping areas of the various ethnic groups are. Street children often operate and find protection by fellow street children of their own tribe or group that they regularly identify with. Children as young as five years are living on the streets.

However, there are also many young street mothers with their babies and families who are on the streets. In Accra, many young boys and girls are working in the streets, but CAS’ fieldworkers cannot assist all. We have set the age limit to 18 years of age.

During the rainy season, and occasions like the Easter and Christmas holidays, many children who sleep in the open find it difficult to remain in Accra.

Several go “home” to assist in the farming and to have a re-union with relatives in celebrating the occasion. This reduces the number considerably during these periods.

The street children have to listen to many officials while in the streets. They include: the AMA (Accra Metropolitan Assembly) City authorities, the opinion leaders, and the leaders of the drivers unions, the security personnel, the gang leaders and traders that they work for.

There are quite a number of children who use stimulant substances. Tramadol is very popular, but also difficult to obtain. As a substitute, the children mix energy drinks with cough syrups.

Of course, alcohol and drugs are also used. Some drugs are mixtures of hard drug and soft drugs. They are less expensive but more dangerous because their strength is not known.

In the early years of CAS the concept “street-corner education” was already conceived. Fieldworkers went out in the streets to meet the children, but for educational programs, children had to come all the way to the House of Refuge. It was felt that, if CAS really wanted to be “street-based” then education should be brought to the streets. It was only in the year 2001 however, that an actual start was made for the realization of the plans.

By then, a structured educational program for Health Education was developed for CAS and this program was used to do experiments in the streets. Fieldworkers from CAS were trained to conduct the lessons and went out to try them in the streets.. In many cases, this was indeed a street-corner. Sometimes the lesson takes place in front of a shop, other times in a corner of a bus-station or on platforms at Railway stations. On one occasion, a staircase inside a commercial building served as an auditorium. A condition for selection of a suitable location was that it should be a point where street-children often gather. Hence the name “meeting point”.

Another condition for a successful lesson is that, it should be done at a time that children are free. This often meant teaching in the evening-time, if children in a certain area were busy all day to earn their money.

The main outcome of the experiment was that education at meeting points in town is possible, despite negative expectations. Once children and facilitators got used to the idea and found their roles, things moved smoothly.

Of course problems were met: not every passing adult took it for granted that a good job was being done and some interrupted the lessons in order to find out what was going on.

Others were so eager themselves to listen to the lesson that they ordered the children to move away. But all these were also opportunities to promote CAS and explain its goals.

An aspect that needs further planning is the fact that street-children are always on the move. This means the program should be well prepared. The children should know on which day and on what time the educators are coming. A topic has to be chosen and a suitable educational game could be helpful to gather them and encourage them to take part.

The choice of topic depends on the situation of the day. When the workers know that many children participating use drugs, a drug related topic is chosen to address the problem. When many children appear sick, the topic of hygiene and self medication could be chosen.

The above text is from the booklet

The 2nd edition of the "Ghanaian Street child". 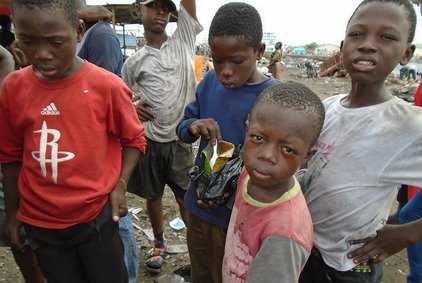 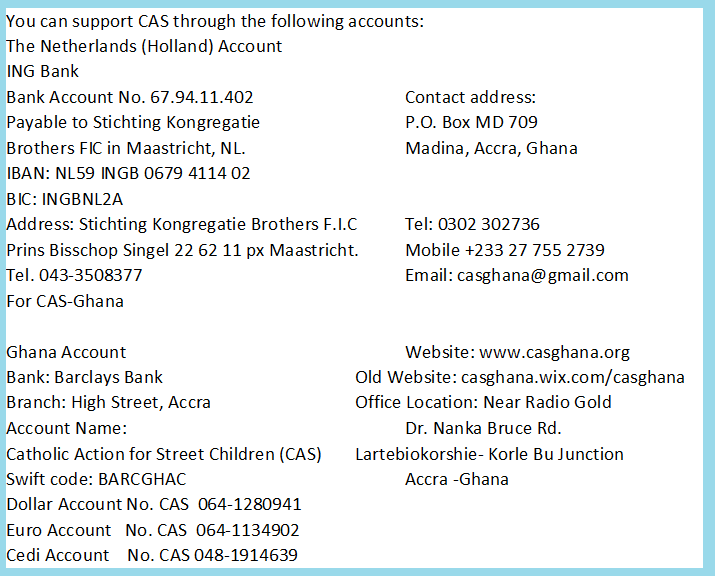 MEMBERS OF THE SUPPORT GROUP CASAS ARE:

CAS works closely with other Non Governmental Organizations (N.G.O.) and one of them is Street Girls Aid (S.AID). S.AID runs a Refuge in Abofu – Achimota, Accra, for those street girls who are pregnant. Before and after the delivery the girls can stay in S.AID's Refuge. They get medical care as well as advice about how to take care of themselves and their baby.

CAS supported S.AID in establishing other baby care creches in Accra. S.AID runs the crèches, where babies and young children are cared for, while their mothers go to work in the market and try and earn enough for both her and her baby to survive.

To boost the fundraising activities of the project, CAS has made links with some donors who raise funds on behalf of CAS. These groups of fundraisers are base in different countries and serve as a month piece for the organization.

Founded in 2008, the Danish NGO engage through local partners with projects in Ghana and in Kenya - all within the field of children and youth. Financially, 100% is funded by trusts, foundations and project grants through the Danish Ministry of Foreign Affairs (link to http://www.cisu.dk/).

In Ghana and Kenya, 100% cooperates with good local partners and organizations who have knowledge about the people and the challenges they face. The projects and partners in Ghana all include a development-orientated approach with focus on capacity building of our partners, networking with relevant stakeholders and advocacy work targeting duty bearers. In general, 100% supports people and organizations who work actively for social change, based on help to self help, peer to peer and a strong foundation within civil society.

Please take a look at 100pct.org for further information.